We will work towards restoring our tribal footprint to our ancestral landscape, in both traditional and economic forms. The Trust will continue to forward plan, research, and seek out commercial opportunities enabling Te Kapu Ō Waitaha to support our perpetual journey toward future growth and development. 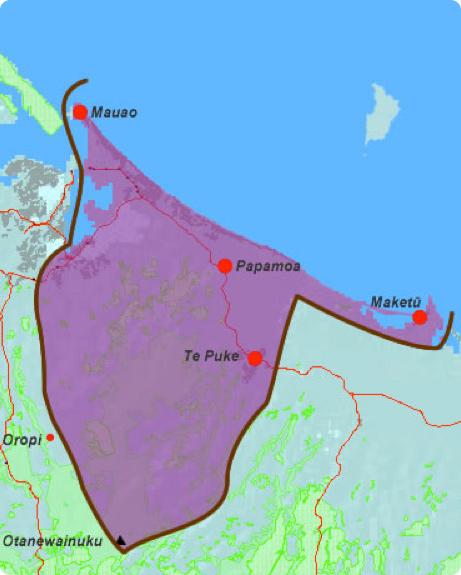 This map shows the Area of Interest agreed between Waitaha and the Crown in the Deed of Settlement signed on 20 September 2011.

The Waitaha rohe covers the lands and waters marked on the eastern side by the mouth of the Kaituna River.

Then follow the Waimapu River down to the Tauranga Harbour and out to Mauao on the coast back down to the mouth of the Kaituna River.

This rohe of Waitaha extends into the regions or districts of the following local authorities.

The Tauranga raupatu placed an additional traumatic layer of meaning on these sites. As markers of the boundary of the confiscation district, they have for Waitaha become entwined with their memories of war, dispossession, and marginalisation.

Te Houhou, Ōtawa, Ōtara and Ōtanewainuku, are a lasting reminder to others of the significance of these places to Waitaha and of the existence of the confiscation line.

The Waitaha Act which was passed in 2013 vested five sites of cultural significance in Te Kapu Ō Waitaha Trustees. Click on the links above to view larger files.